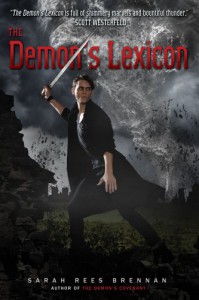 Sarah Rees Brennan is a genius of cruelty and making my heart hurt while I laugh and enjoy it.

I picked up THE DEMON’S LEXICON after reading UNSPOKEN, half to deal with the emotional trauma the absence of UNTOLD was causing and half because the premise sounded really interesting. Thing is, though, that I already knew how the first book ended.

And I mean, I knew a MAJOR spoiler.

I don’t think i could have dealt with this book if I hadn’t. As it was, it blew half my brain to smithereens and the other half to goo. It was that good.

Nick Ryves is our main character in this first book and he is, to say the least, um, sullen. A little cold-hearted (lol) and very impulsive. He has no time for anybody’s shit and doesn’t understand why he should. He was such a compelling voice. I have never felt so much for a character—except maybe Kami and Jared, funnily enough. And it wasn’t just love or anger for him. It was at him. Nick made me so fiercely mad and so fiercely concerned and deer gawd it was like he was real.

But it’s not just Nick. This book (all three of them, actually) focus heavily on Nick’s relationship with his brother, Alan oh alan you little conniving motherfucker i love you and Mae and Jamie and, eventually, Sin. All characters that made holes in my heart and then wedged themselves in there until I was crying and wailing and eating oreos like there was no tomorrow. They’re so complex and real and so painfully fictional. Why. WHY.

One thing I really appreciated in this book is how diverse the cast was. Nick was… Nick--I’m sorry anything else is a spoiler--, Alan was disabled, Mae was that one kid with pink hair (fantastic), Sin was a WOC, Jamie was gay. But they weren’t just that. They were people, with lives, with stories, not tied down to adjectives. They weren’t just stereotypes.

And the plot. The plot! Remember how I said I knew a pretty major spoiler? And this book still completely surprised me? Yeah. There’s a reason for that.

You all know by now I’m a big fan of Sarah Rees Brennan—and it’s not just because she’s a fabulous person, and hilarious, and has the best accent, and shimmies on chairs pretending to be a flapper although that’s very awesome. She earned all this respect. SRB is a fantastic writer, who pulls you in and wrings you dry of all feelings, hanging by your fingertips while all the best stories unfold around you.

And if you don’t think that’s the best thing then I don’t know.

I read all three books in this trilogy in three days while writing a Cancer Bio paper that I may or may not have procrastinated for far too long. You should, too.
Tweet
223 BOOKS