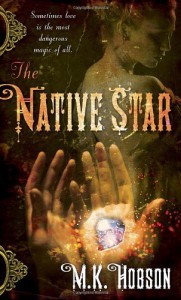 Sooo THE NATIVE STAR is not YA. what but this is a ya blog water u doin stop

Yeah, I know. But, it’s such a fantastic read I just had to recommend it—and it reads like young adult!

Ok, so I read THE NATIVE STAR a good 3-4 years ago. I read while at Disney World. Just that alone should tell you how awesome I thought it was, if it distracted me from Mickey-shaped ice-cream and going to see The Festival of the Lion King a thousand and thirty seven times. That good.

It follows Emily, who is a witch and fiery and dances naked under trees (only sometimes). I just cannot tell you how much I love Emily and how awesome she is. She does not let crap stand in her way; she’s strong and sensible and one of my very favorite female characters. She’s also paired up in this journey with one of my favorite male characters i think it’s safe to say this is favorite all over: Dreadnought Stanton.

Dreadnought, my sweet baby child hot man. Here you have a character I would truly want to meet and marry. He’s so loyal and flawed and amazing and Emily hates him so much at the beginning of the book. Hell, I hated him as well, but he just kind of grows on you—like a vine or a weed. Emily and Dreadnought together were just unf. They complemented each other and challenged each other and I’m sorry I have to go deal with these feels.

I’m rambling about characters because this book is just a jewel in that aspect. Not to say that everything else is not awesome as well. It is. The world is rich and builds around you, with magic and history and science. I think it’s technically termed gaspunk? I may be making that up. A softer stempunk, maybe. I don’t really care. Whatever M. K. Hobson did here wasfantastic and I’m so glad it has a sequel and a second series and yes, please give me all the books.

THE NATIVE STAR made me a fan of M. K. Hobson’s writing forever, basically. More people should read these books. Now.
Tweet
223 BOOKS